How it Feels to be a Master of Wine

I’ve taken a long time to write this post.  When I first found out way back in September that I had finally finished what I had been working towards tirelessly for 8 long years, it was somewhat surreal.

My sister, her husband, and my nephew were in town visiting with us.  It was Sunday night before Labor day and we were up late, enjoying each other’s company, drinking wine, and playing cards.  I knew the call was coming but I didn’t know when nor did I know the outcome.  When my phone rang it was an unknown number calling me at 11pm at night.  I answered and heard Penny Richard’s voice on the other end.

I numbly listened to the rest of the conversation replying with “Thank you”s and “Yes I understand” to the instructions that Penny was giving me.  I hung up the phone and got to work on signing the code of conduct and taking care of some business aspects that no one really prepares you for.  I then calmly went back to playing cards after being hugged all around and opening a bottle of Champagne I had set aside for just such an occasion.  It really didn’t feel real.  Almost immediately I began receiving congratulatory emails from the international MW community.  It was amazing but also daunting.  I replied to everyone eventually with my heartfelt thanks but it did take me some time.  The overwhelming and immediate support you get from the veteran MWs is amazing!

The Tuesday after Labor day, I went back to work.  I was inexplicably changed however it seemed that life, in its crazy, strange way, was infuriatingly normal.  This was such a bizarre feeling.  As if I was going around living someone else’s life for a time.  Then I began to receive interview requests as word began to trickle out into the general industry news.  This is when it started to feel more real.  As more and more people found out I began to hear from many old and current acquaintances, friends, and colleagues.  Many months of congratulations ensued leading up to the graduation in London in November of last year.

I was excited to return to London.  I had been there several times before both for work and pleasure and it’s always a fun city to visit.  We splurged on a hotel across the river from Big Ben and took our son on his first international adventure.  It was about spending time together and reconnecting as a family after so many years of hard work towards this goal.  We only had a few short days in London and I wanted to make the most of it with my family. We did all the standard touristy stuff including the London eye (which we could see up close and personally from our hotel room, the Tower of London, and a river cruise.  My son, to this day still asks when we are going to go back. 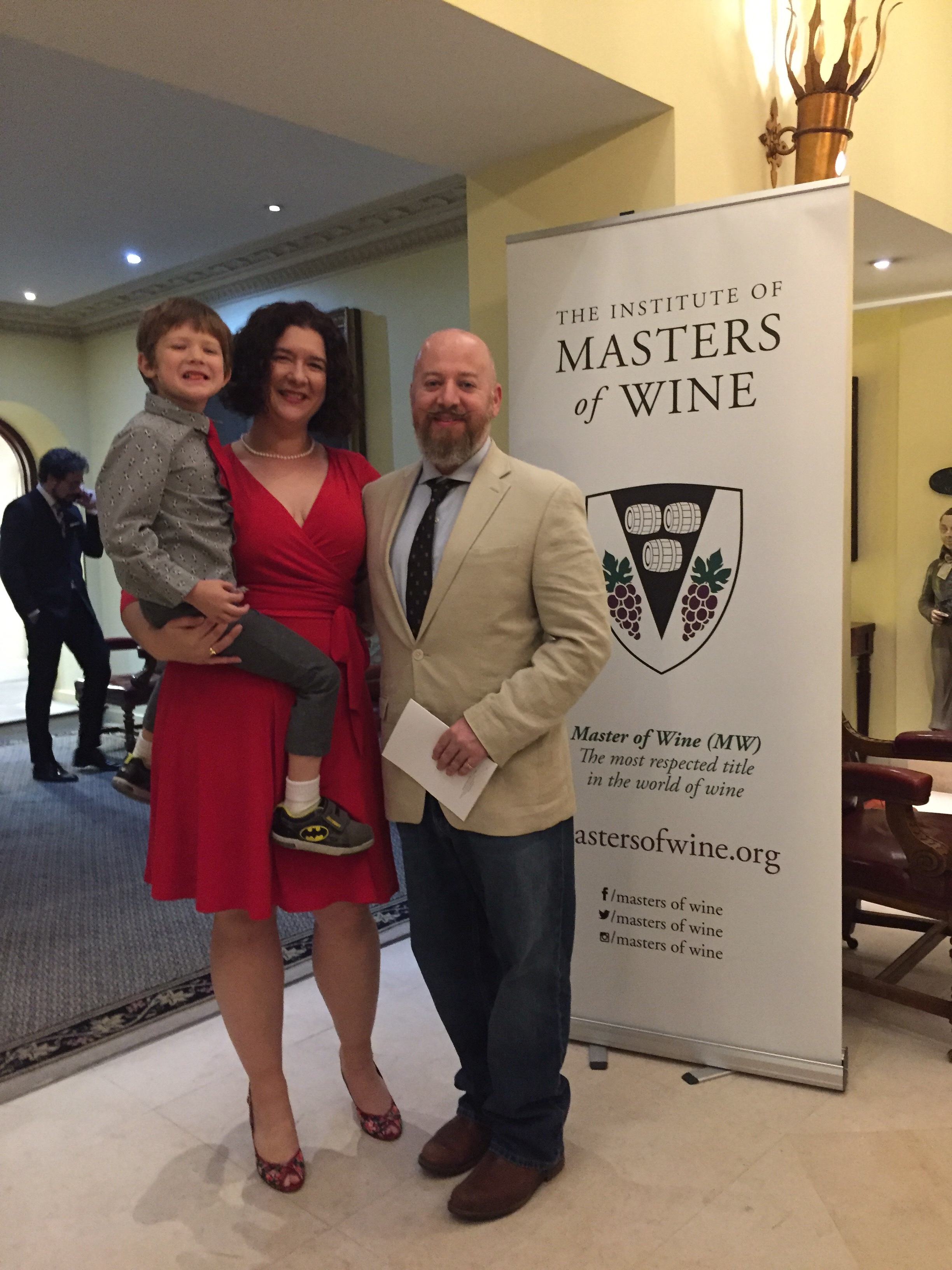 The Master of Wine Ceremony was and will remain one of the greatest highlights of my life.  I had to arrive early to the Vintner’s Hall for a briefing on the Institute and rehearsal for how things would go.   Walking into that historic building was the first real sense that I had accomplished something really astounding.  My seat was labeled with a sign proudly proclaiming “Nova Cadamatre MW”.  We took pictures all together, with family, and with members of the Institute then attended a reception prior to the ceremony itself.  My son, being newly 5 years old, still jet lagged, and over stimulated from the busy day, decided that was the time he wanted to take a nap and only I would do for that task.  There I was, in a moment that was once in a lifetime surrounded by so many amazing people that I would have loved to talk to with Champagne flowing, sitting in a corner with my child resting his head on my shoulder lightly snoring, remembering that regardless of what I accomplish in my life and professional career my most important role is that of “Mama” and nothing else comes before that.

“The roar that came up from the group was the most amazing experience.  It was deafening, echoing off the gilded walls and shaking the very rafters of the historical building.”

He woke up in time for me to line up for the ceremony.  We lined up at the back of the Hall as our guests and well wishers found seats and settled in.  As they announced us as the new MWs, we entered the back of the hall.  The roar that came up from the group was the most amazing experience.  It was deafening, echoing off the gilded walls and shaking the very rafters of the historical building.  Cheers, applause, whistles, congratulatory nods, smiles, and winks from those who I could briefly catch the eye of.  I wish I had thought to have someone video tape that moment we all walked down the aisle as new Masters of Wine.  It was unbelievable.

Then hearing your biography read as you approached the stage to gather your certificate, you can’t help but to reflect over the time that you worked for this moment.  The days and nights tasting and studying.  The moments on the weekends where you chose to do a practice exam rather than relaxing.  The money spent on tuition, wines, and travel. The dedication and sacrifice of time that it takes to accomplish something of this magnitude.  Those moments of dark times when you feel like the goal is so far away that it is almost unreachable.  Every person who ever told you you couldn’t do it and every person who told you that you could.  All of it floods into you as you rise to walk up to the stage as the final steps to your goal.  Even when they called my name as the winner of the Taransaud award, I was a bit in shock. It still didn’t really feel as though it were real.  It felt very dreamlike and although the magnitude was beginning to dawn on me it was far from normal for me at that point.

Finally, after the pomp and circumstance fades and you begin to adjust to life after MW, you realize that it was worth it and it is real.  I attended my first seminar as an MW in January in San Francisco.  I stood at the back of the room with my fellow MWs and realized that I had truly made it.  It wasn’t until that moment when I fully felt the journey was complete.  I had made it to the “other side of the table” and that was where I was meant to be.  I get to now look forward to a lifetime with the title of MW, which is so exciting.  I’m sure as the decades move forward, the 8 years it took me to achieve this, seeming so long in the moment, will feel like mere days as the full extent of the title, which  I am still discovering, unfolds during my life.

To my fellow MWs, I’m so excited to be among you.  Thank you for your support!

To people aspiring to walk down that same amazing aisle in London, the best advice I can give you is never give up.

Have faith in yourself, always believe it is possible, and be prepared to work hard and sacrifice for what you want.