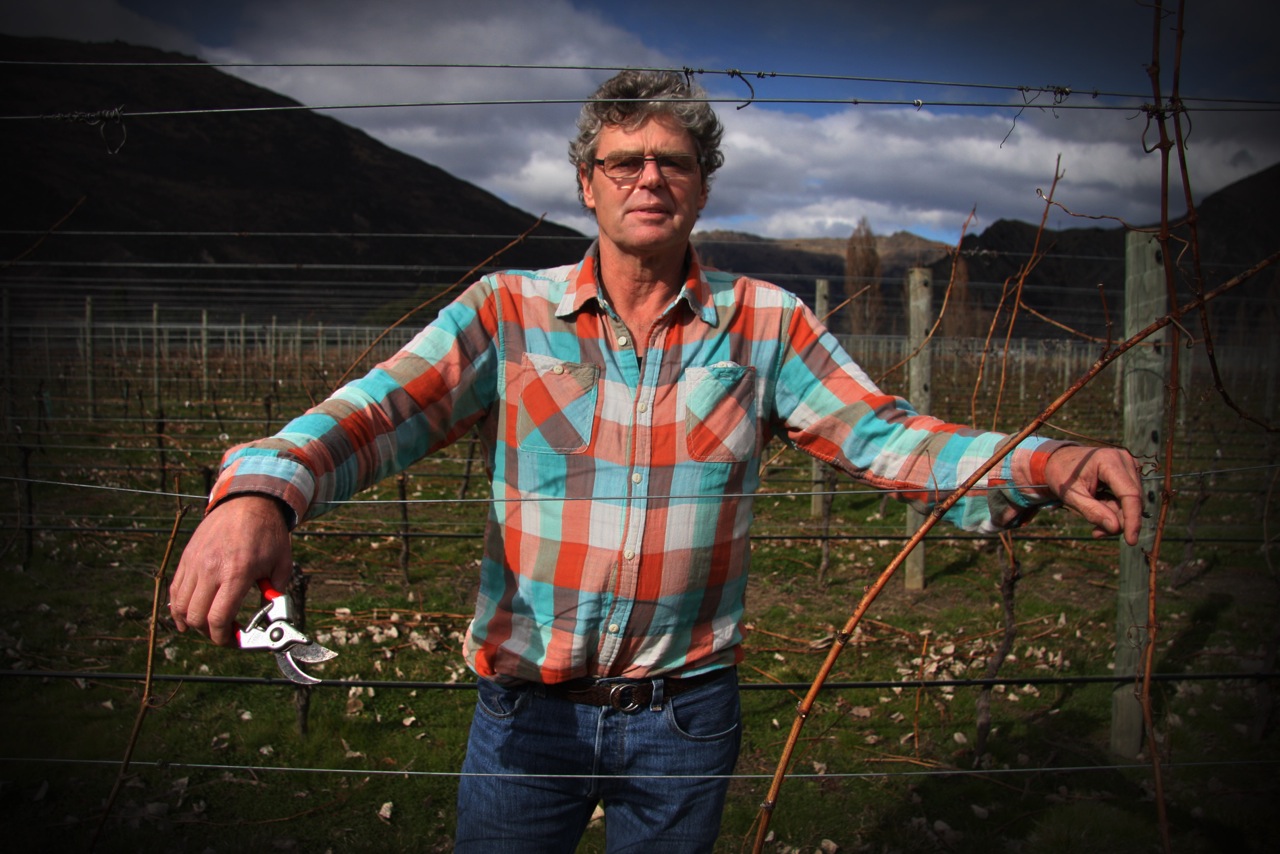 This month’s Winemaker 2 Winemaker interview goes to the Southern Hemisphere to talk to Grant Taylor of Valli Vineyards in Central Otago, New Zealand.  Having been in the industry for 40 years, he is a wealth of information and I really enjoyed gaining his perspective on Pinot Noir, Central Otago, and the industry as a whole.

NC: You have been a part of Central Otago from almost the very beginning of the region.  What did you see in those early years that helped you decide that the area was ideal for Pinot Noir?

GT:  In the very beginning it wasn’t that we necessarily saw the region as ideal for Pinot Noir. Rather it was a great place to live in, grapes could be grown, wines could made and an exciting future could  be had doing both better each year and discovering a completely new region.  At first there were many varieties planted, however each year Pinot Noir consistently performed better than other varieties, I guess that was its way of saying “I like it here”, we listened and dedicated most of our efforts and experimentation towards it.

NC: So many people in the US think of New Zealand as only Marlborough but Central Otago is quite different from Marlborough.  What are the key aspects of this region that make it unique?

GT: The key difference between Central Otago, and not just Marlborough but all other NZ regions is climate. We have New Zealand’s only semi continental climate. Low humidity, long dry cool autumns mean very little disease pressure, we generally tend to harvest when we choose rather than because of pressure from weather or disease.  We can hang Pinot out and get physiological ripeness without high sugar levels. Through summer the warm days and cool nights mean we retain acidity.

NC: There are rumors that we’ve heard in the US that there are going to be established sub-regions of Central Otago soon.  Do you see this happening and do you think it’s a good idea for the region as a whole?

GT:  Central Otago has a number of very distinct sub regions.  They were established long before man arrived it is just a matter of defining them.  In Burgundy, there are consistent recognizable differences,  some cases in a matter of metres. If you look at a map you will see how far away Wanaka is from Alexandra, Gibbston is from Bendigo it is roughly 30-40 km between most  sub regions. The soils and climate are very different so its logical  that the wines are very different. It is almost irrelevant if it is good for the region, what is important is that it is good for the consumer, over time they will come to recognize  what style of Pinot each sub region offers and can choose accordingly. Most of us making wines from a single sub region who  state the sub region  on the label do so to give the consumer (to who it matters and there are more of those every day) more information. These sub regions as yet are not “legally” defined as there are yet a couple of lines to be drawn and this needs more time for the wines to tell us where these lines are, most however are naturally geographically defined.

GT: I do not necessarily think it is harder than any other grape to grow or make great wine from, it just seems a lot fussier as to where it performs well.  It responds to care and attention more in the vineyard than any other variety I have worked with so that’s where most of our effort goes.

NC: You make a Riesling as well for Valli Wines.  What are the typical characteristics for Central Otago Riesling? Are there challenges to growing Riesling in an area that is warmer than some of the others on the South Island?

GT: Rieslings are grown in all Otago sub regions and come in a wide range of styles depending on producer,  but to generalize the flavours tend to  pretty floral lime blossom,. sometimes a little stone fruit; white peach and nectarine when riper. As mentioned earlier because of the cool nights we tend not to respire acid as much as other regions, the key, or perhaps challenge is to balance the acidy with some residual sugar.

NC: You have a career which goes far beyond Central Otago to California and Oregon as well.  What have you brought away from these other areas that have helped you as a winemaker in NZ?

GT:  Beside the normal winemaking you learn along the way, one of the earliest and most important things learnt was the importance of place to the vine and its resulting wines. I was lucky enough to be working at Pine Ridge in Napa Valley in 1980 when Gary Andrus wanted to use the term “Stags Leap” on the label. We held many tastings in an attempt to define the appellation, the arguments were not only political but also about the individual sites, did the wine from a specific site have Stag Leapness? Is that a word? The whole exercise left a very strong impression/scar on the importance of place that I think drives my winemaking 35 years later.

NC: Is there a vintage in your career that you would like to experience again, knowing what you know now?

GT:  No, I always dream of the next one.

NC: What was one of the most memorable winemaking mistakes you ever made that you still think about to this day?

GT:  Again, it is the early things that leave the biggest impression.  Within my first month I turned a shiny, new 10,000 gallon refrigerated stainless steel tank (value; about 10 times my whole net worth then) into what looked like a gigantic version of a soda can someone had stood on.  At university they never tell you what happens to a tank if while you are pumping  wine out and about when 70% done you climb to the top to have a look and close the lid while still pumping.  Actually, I still blame the winemaker for having a sealed cap where there should have been a two way pressure relief valve, but no one else saw it that way.

GT:  Make sure you are loving it, if you do not like where you are, find another winery [or] another region. It is not the industry. It is the situation.  It is a bit like a relationship.  Sometimes to stay in love, you need to move on.

GT:   Work in the vineyard

The winery is easy

The rest is balance

NC:  In addition to Valli, do you have any other projects that you are excited about right now?

GC:  Nothing else besides Valli, but there is plenty to be excited about there. Recently we acquired another 7 ha property in Gibbston. [It is] a mixture of Pinot Noir and Pinot Gris so we now making Gibbston Gris and have a slightly different site in Gibbston to compare with our home block of Pinot Noir. Also, we are working more in the Waitaki Valley , North Otago, have been making Pinot from this region since 2004. There are a lot of active limestone soils in North Otago [and] now as well as Pinot Noir we are making small amounts of Riesling and Chardonnay and having a lot of fun understanding  (for the  second time), a completely new wine growing region. We are having a little foray into the single malt world having sent a container of our used barrels to Scotland for Whiskey aging, the next overseas trip will be to Scotland to check on the venture’s  progress.  You can’t drink only just  wine.

If you are interested in tasting Valli Vineyards wined in the US go to JJ Buckley.

NC:  Thank you so much Grant!