I first met Peter Bell while I was a student at Cornell.  He routinely came as a guest lecturer in the Enology side of the Viticulture and Enology program.  I recall great discussions on making the styles of wine the fruit want to make and practical examples of what we were learning from our books.  I also was very impressed with his ability to hit a spittoon from a ridiculous distance without making a mess.  It is a talent I have tried to strive for but I’ve fallen far short of his talents there.  He is described as one of the winemakers that has had the most influence on the rise of the Finger Lakes, not only through his work with Fox Run but also through various consulting jobs throughout the region.  He was generous enough this past week to sit down and answer some questions for this month’s Winemaker 2 Winemaker column. 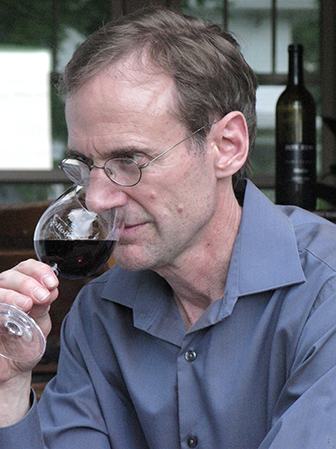 NC: You have had extensive international winemaking experience.  What led you to settle down in the Finger Lakes?

PB: I had paid very scant attention to this region before deciding to move here in 1990. Bully Hill Winery had gained some notoriety in the 1970s, but those were not the kinds of wines I was interested in making. But after talking with a guy I met in New Zealand, who pointed out the great potential for Riesling here, I decided to look more closely at the Finger Lakes. My wife’s and my families are from the Toronto area, which is an easy drive from here, so it seemed like a perfect place to establish a career.

NC: The Finger Lakes have gotten a lot of great press throughout the past few years.  What do you think has changed in the region from what was being done 10 years ago?

PB: It’s really a confluence of a lot of things. The quality of the grape growing and winemaking has steadily improved. There has been a concerted effort by many individuals to get Finger Lakes wine (especially, but not limited to, Riesling) out to other parts of the world and undo the area’s reputation for products with only regional appeal. And I think that as the influence of my generation, the Baby Boomers, wanes, wine drinkers are becoming less orthodox in their purchasing habits and more open to any wine that happens to be delicious, no matter where it comes from.

NC:  Did you have a person or people in your career you felt were instrumental in inspiring your personal winemaking style?

PB:  No, but not because I didn’t know some great teachers and winemakers when I was starting out. When I moved here, I had to give myself a crash course in cool climate winemaking, given that vintage was a few weeks away. So my personal style was forged in my own fire, I suppose. Naturally, my approach to winemaking has evolved over the years, and for that I can thank many, many colleagues.

NC:  Is there a vintage in your career that you would like to experience again and why?

PB:  One or two of the best vintages in my career happened when I was in the company of a psychopathic owner, so for obvious reasons I wouldn’t like to repeat the experience, even though I could use grapes of that quality a few more times in my career. We are talking of long ago. Much more recently, the 2012 vintage in the Finger Lakes yielded some pretty spectacular fruit that made my job not only easy but enormously pleasurable.

NC:  What was one of the most memorable winemaking mistakes you ever made that you still think about to this day?

PB:  I can list quite a few “almost” catastrophes, such as hooking up a hose to the wrong tank, or watching helplessly as a tanker truck of wine slipped out of gear and started lurching toward the lake. I’ve been very lucky, though, overall.

The best grape on earth

Happens to be called Riesling.

Jancis thinks so too.

NC: One of the things I remember the most from your excellent winemaking lectures when I was a student at Cornell was your amazing ability to hit a spittoon from several feet away.  Did you practice or are you just naturally an amazingly accurate spitter?

PB: My parents were atheists, and instead of giving me a Biblical middle name like Luke or Revelations, I got ‘Expectoration’. Thence I had a prophecy to fulfill.

As an adult, I managed to hang out with some people who were not only adept at carrying on a conversation with a mouthful of wine, but who could then land that mouthful in a small, distant vessel without trouble. So perhaps it became a chest-beating exercise of some sort to attain some level of proficiency. I can’t remember.

I have to add that when I showed these last two questions to my intern Julie, she combined them into one answer, a haiku about spitting:

My name is Peter

I am a wine boss I spit

NC: What are you most excited about when you look towards the future of winemaking in the Finger Lakes?

PB: The continued primacy of Riesling is pretty much a given. That’s a dream of mine come true. What thrills me beyond that is the number of very talented and super-smart younger men and women who are taking over, just as people like me contemplate riding off into the sunset.

PB: Taste often with your colleagues, learn from them, and strive to work together as a community of winemakers. The idea of confidentiality clauses, at least in this region, is obscene to me. There is room at the top for everyone, and poor wines drag the entire industry down.

NC: If you had to pick a favorite wine region (outside of the one you are in of course) where in the world would it be?

PB:  I get asked this question pretty often, and like to mix up my answers just to avoid undue repetition. I love Sherry and always have, so Jerez has to be on the list. I’ve never been to South Africa or South American wine regions, but they sound pretty fun.

One of the best Rieslings I ever drank came from – wait for it – Luxembourg, so I might have to check that country out some day. Really, though, every wine region I’ve been to (and that would be too many to count) has one thing in common: lots of very friendly winemakers who are eager to show you what they are making and who speak the same language of wine love.